Go straight to the accessibility menu.
Homepage > Latest News > Student is awarded at congress of the Society for the History of Science
Top of page content
Follow our Blog

Student Nathália Miwa Arasaki Menezes Freitas, from the Chemistry Degree course at Câmpus São Paulo, received the award for "best Scientific Initiation poster" at an event organized by the Brazilian Society for the History of Science (SBHC).

The award ceremony took place on November 17, during the closing of the 17th National Seminar on the History of Science and Technology, in an online session. Meet the winners here. 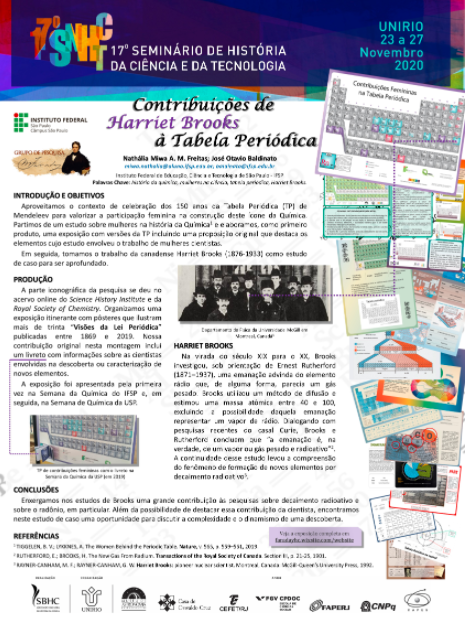 The "SBHC Scientific Initiation Award" was awarded to Nathália for the work entitled "Harriet Brooks Contributions to the Periodic Table", in which she disseminates the exhibition she has prepared with dozens of historical versions of the Periodic Table and deepens a case study on the Canadian Harriet Brooks (1876-1933), who was a master's student at Ernst Rutherford (1871-1937) in the early XNUMXth century and played an important role in the studies that led to the discovery of the radon element.

The research in History of Science that Nathália conducts under the guidance of Professor José Otavio Baldinato has ater documentary and involves the location and analysis of original articles, biographical data and correspondence records, in addition to a contextual reconstruction of the historical moment portrayed.

The first results highlight research questions related to radioactive emissions recently studied by Marie Curie and the gas diffusion analysis techniques, conducted by Brooks and Rutherford, which led to the characterization of the new chemical element, radon. The follow-up of available records on Brooks also reveals issues sensitive to women's participation in science. Brooks' doctoral plans were apparently affected by the marriage and his academic output waned after moving from Canada to England, although his initial research continued to receive citations in later Rutherford publications. The end of this story is still being interpreted by Nathália and should be presented in new congresses and articles.

Click here to see the exhibition "Visions of the Periodic Law", conceived and realized in this CI project.