Mapping points to acceleration of Covid-19 in the interior

The study carried out by Professor at Câmpus Catanduva at IFSP Thaís Tinós and by geographer Mateus Vidotti generated new maps on the spatialization and evolution of the new coronavirus for the Government Region of Catanduva. 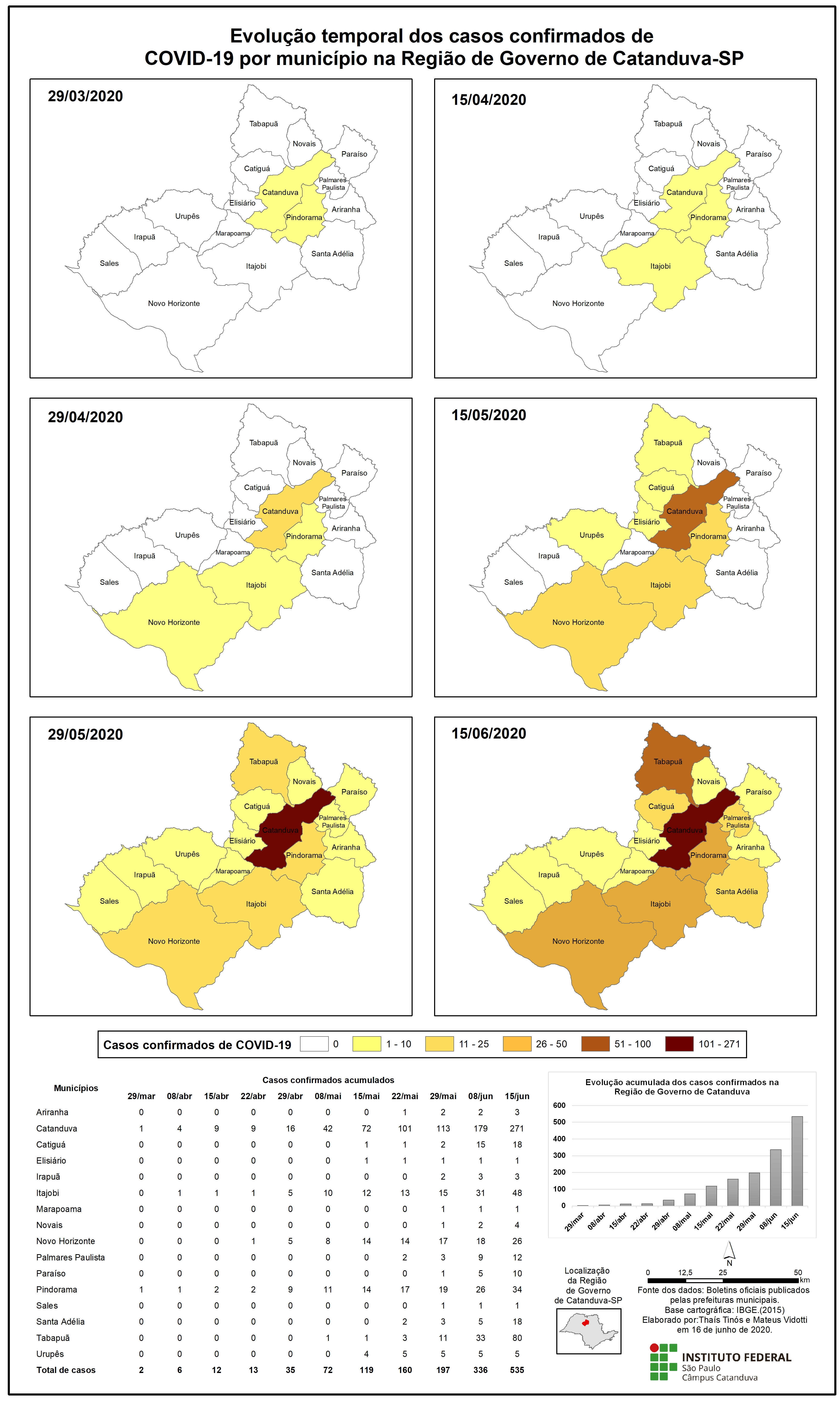 From the maps, tables and graphs generated in this stage of the study, it is possible to verify the accelerated interiorization of cases of COVID-19 in the last two weeks. All municipalities in the Catanduva Government Region presented cases of the disease in June, differently from what happened in May, when only five municipalities started the month with confirmed cases.

On June 15, the region reached 535 cases of the new coronavirus and 25 deaths. The lethality rate, which shows the percentage of patients with the disease who progress to death, points to a rate of 4,7% for the region, lower than the state average (5,9%) and the Brazilian one (5,0 %), but that still requires attention, as it can vary drastically due to underreporting.

As an example, the teacher cites the cases in Catanduva and Catiguá. The first confirmed case in Catanduva, on March 29, was released by the municipality on the same day, however, it was displayed on the Ministry of Health's page only on April 1. In Catiguá, 18 cases were confirmed on June 14, but only seven cases were reported by the ministry.

According to the researcher, the delay in transferring and registering information, added to underreporting, makes it difficult to measure the progress of the disease in Brazil. In addition to this problem, some cities do not regularly issue newsletters about victims of the disease. In these cases, the researchers use data from the State System of Data Analysis Foundation (SEADE). 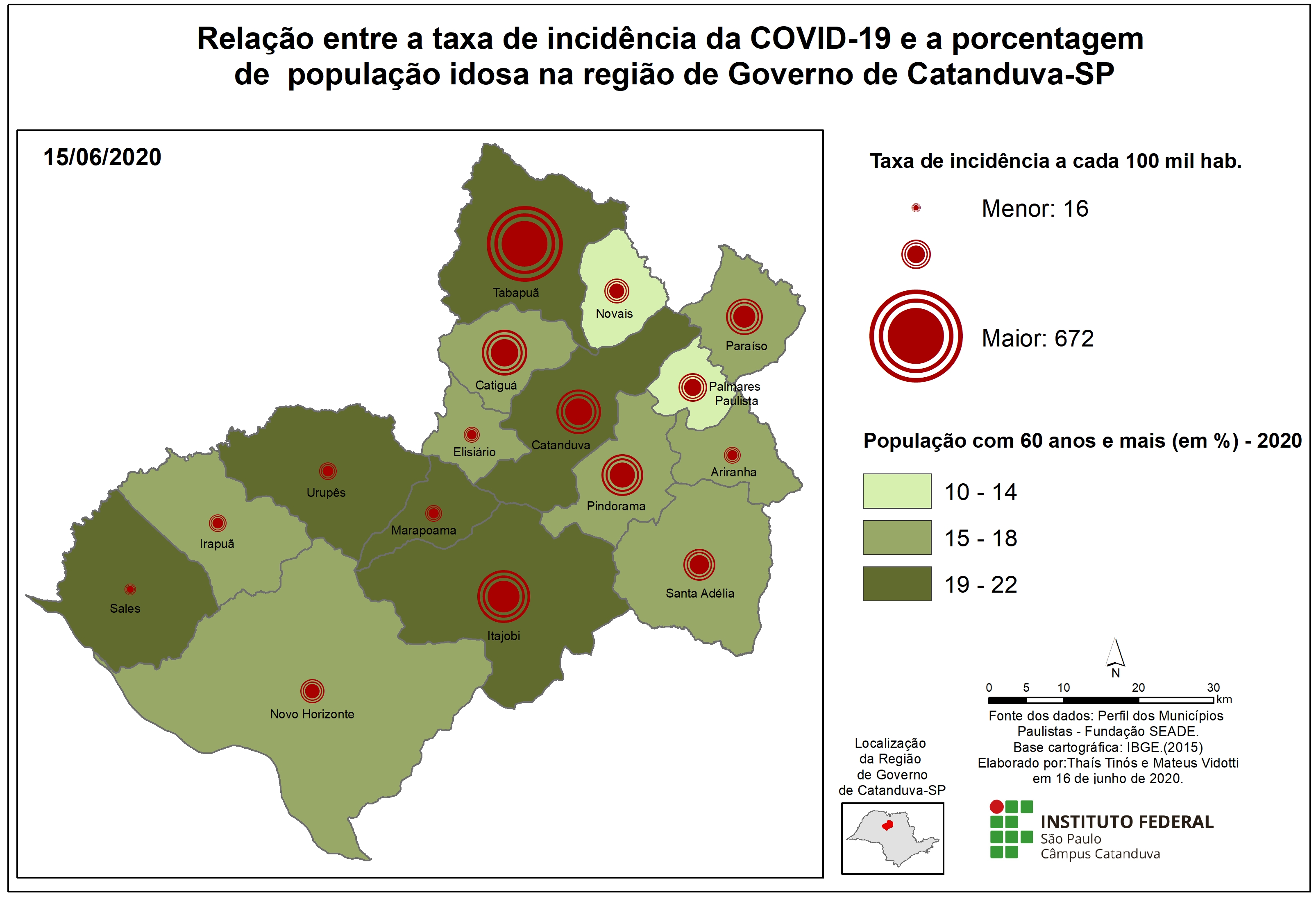 The researchers highlight the vulnerability of the elderly population. According to data from the SEADE Foundation, the region analyzed is one of the regions with the highest number of elderly people in the state, a group considered at risk for complications caused by the new coronavirus.

The region started, on June 1, the easing of the quarantine. Thaís and Mateus, however, have reservations with the measure. "The pace of contagion has accelerated in recent weeks and the easing of social isolation tends to aggravate the situation", warns the geographer.

Thaís also remembers the problems that the proximity to winter can bring. During this period, there is already an overload of hospital beds due to a higher incidence of respiratory diseases. "The cities in our region, as well as most small and medium-sized cities in the interior, have fewer ICU beds than Greater São Paulo, which can result in an even greater burden on the hospital network than in the capital," says the professor.

In the next mappings, the researchers aim to analyze the occupancy of the ICU beds and to verify the underreporting of the new corona virus by comparing the number of deaths from pneumonia, respiratory failure and severe acute respiratory syndrome this year in relation to the same period in previous years. .

They also intend to map the cases of the disease in the neighborhoods of Catanduva, in order to help understand the spread of the disease throughout the city, despite the difficulty in accessing information. “We have been trying to establish a dialogue with the municipality's epidemiological surveillance for weeks to obtain this data. This type of mapping encourages social isolation, as people visualize the areas of greatest risk of contagion in the city. In addition, this mapping helps local authorities to plan actions to control the progress of the disease ”, concludes Thaís.