Institute will save 20% on energy. 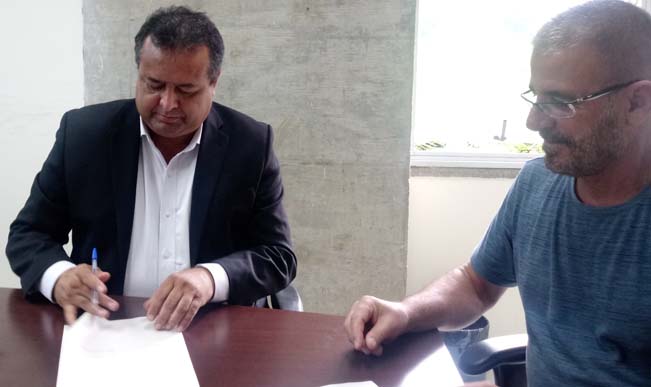 IFSP's Dean of Administration, Silmário Batista dos Santos, signed this Tuesday (14th), the commitment notes for the acquisition of photovoltaic systems for 32 of the Institute's 36 campuses. Some of these campuses already had solar photovoltaic plants and will now start to generate even more clean energy. The others, who did not have it yet, will have significant savings with the electricity bill. The expectation is that soon all units of the IFSP will be contemplated.

According to Silmário, the estimate is that energy expenditure will be reduced by 20%. The total investment for the acquisition of the systems will be R$ 3.743.235,20. The funds were obtained through parliamentary amendments and from the Ministry of Education.

Contracts with supplier companies are yet to be issued, but the dean believes that the systems will be installed in the first half of this year.

The Presidente Epitácio, São Paulo, Boituva and São Roque campuses already have photovoltaic systems. Presidente Epitácio was one of the first IFSP units to inaugurate energy efficiency works. This campus was included in public calls for energy efficiency projects 001/2016 and 002/2017, by ENERGISA Sul-Sudeste Distribuidora de Energia. Through the projects, the campus promoted everything from changing light bulbs to installing a garage and a photovoltaic plant. From May 2017 to the end of last year, the Campus Presidente Epitácio saved more than 130 thousand reais with energy.

In Boituva, the acquisition of the new photovoltaic system will bring the campus closer to self-sufficiency in energy production. Câmpus Boituva already has a photovoltaic plant in operation, installed with resources from CPFL Energia, through a project contemplated in the call 001/2016 by ANEEL and achieved a 70% reduction in the electricity bill. In addition to the photovoltaic plant, energy efficiency actions included the replacement of lighting and air conditioners with more efficient equipment.