From computer forensics to natural food: check out the diversity of the works of the 10th Conict and 4th Conpog

Those who participated in these two days of holding the 10th Conict and 4th Conpog were able to observe the richness of the knowledge produced and the quality of the research carried out in the 36 campuses of the Federal Institute of São Paulo. In a visit to the poster exhibition hall, for example, we found works that studied everything from computer forensics, to assistive technologies and the development of natural soft drinks, to the analysis of intolerant and authoritarian behaviors of young people on social networks and in schools. This is a small sample within a universe of 750 works presented at the two congresses.

When we think of a student in the Systems Analysis and Development course, we usually imagine the figure of someone who is fascinated by software, networks and computers. But when we learned about the work of Nadjila Tejo Machado, from Câmpus Pirituba, we discovered an ADS student concerned about people and their safety. Because of this concern, she decided to study how Telemedicine can help computer forensics in the event of a data theft incident. Computer forensics, in summary, has the objective of solving crimes (virtual or not), through the processing of digital evidence. 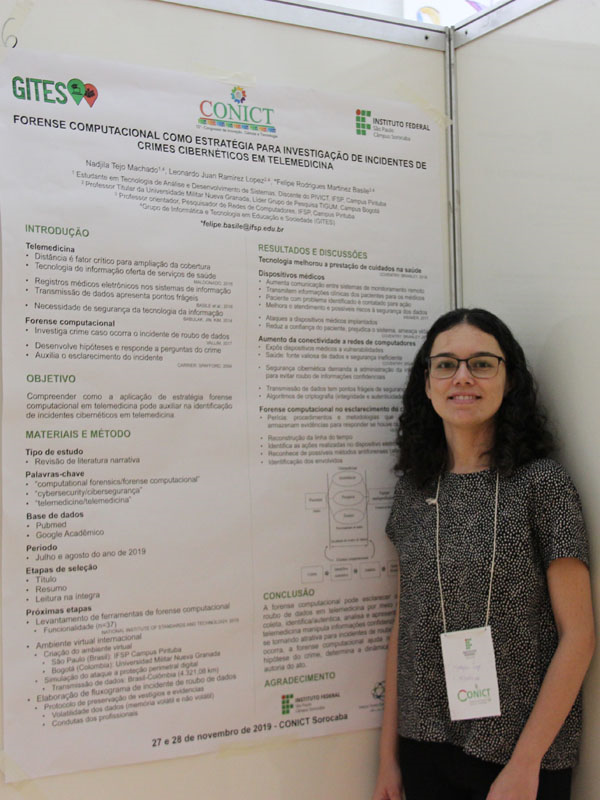 Nadjila said that few hospitals invest in cybersecurity; when they do, it is after they are attacked. According to her, if a hacker breaks into the network of a complex health unit, the consequences can range from a delay in consultations to the interruption of chemotherapy sessions, as has already happened at the Barretos Cancer Hospital. “The research is still ongoing, but we believe that telemedicine can help computer forensics to investigate the authorship of the act and the dynamics of the crime. We have already carried out a survey of computer forensic software registered in the National Institute of Standards and Technology (NIST) and we realize that they are not very accessible, access to information is a little complicated. We are also working on developing a data preservation protocol so that the hospital can know what to do, and at what time, to be able to preserve both data and lives. ”

Using technology with a focus on people is also the objective of the project that is being developed by Professor of Electronic Engineering and Research Coordinator at Câmpus Sorocaba, Sérgio Shimura, in partnership with José Otávio Pompeu, professor in the area of ​​Computing and researcher in assistive technologies from UFRJ. The two, together with about 20 volunteer students, are developing the prototype of an electric car, powered by solar energy, for people with physical disabilities.

According to Shimura, the project started in February, and four people with physical disabilities were interviewed to learn about the greatest difficulties and needs to adapt to the vehicle. According to the teachers, the car, with a capacity to transport up to two people, will be able to do up to 50 km / h, using a 4kw / h battery. The vehicle will have a removable solar panel that will guarantee a range of 30 kilometers. “We are also studying to install a wind turbine. We are already in the final part, the engine is ready, we still need to install the batteries ”, said Sérgio.

Thanks to the partnership with a company in the region, they have already obtained, through a donation, the batteries needed for the engine. Coincidentally, a meeting provided by the 10th Conict may result in a new partnership so that the batteries that the group has managed to be remanufactured. During the presentations of the work, the group met Gabriel Peres, a student in the Control and Automation Engineering course at the São João da Boa Vista campus, an intern at Startup Energy Source, who works with solutions for energy storage. "We started talking about the partnership, we are going to make contact between them and the company and I hope it works out," said Gabriel.

From assistive technology we started to healthy eating with the scientific initiation work of Brenda Vendramini, student of the Food Engineering course at Câmpus Matão. She and her advisor, Márcia Rizzatto, studied the production and characterization of white tea Kombucha on a laboratory scale. Kombucha is a sweet drink of Asian origin based on Camellia sinensis teas fermented by yeast and a symbiotic association of acetic bacteria. 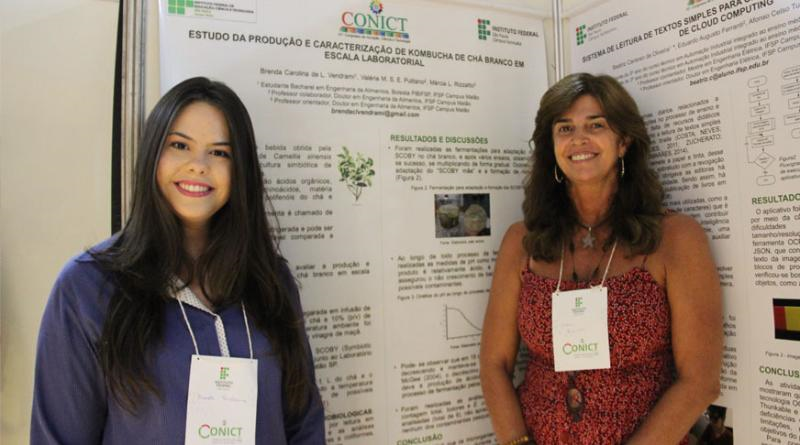 Although the drink has been consumed intensively for a long time because it has prophylactic and therapeutic properties, most of the properties have been deduced based on personal observations and testimonials, and only a few effects have been scientifically demonstrated. “With the tests carried out in the laboratory during the project, after 15 days of fermentation, a tasty natural refrigerant was obtained. Various flavors can be used, but what we did and was more accepted was the ginger with cinnamon ”, said Brenda.

From Matão we arrived in São Miguel Paulista, where Isadora Matias, a 2nd year student of the Integrated Technical Course in Audiovisual, researched intolerance, authoritarianism and political socialization in the digital and school spaces frequented by young people from São Paulo. She and the project team analyzed Facebook pages and YouTube channels that (re) produce hate speech and the persecution of minorities and also applied questionnaires in schools in Itaquaquecetuba and in the East Zone of São Paulo. 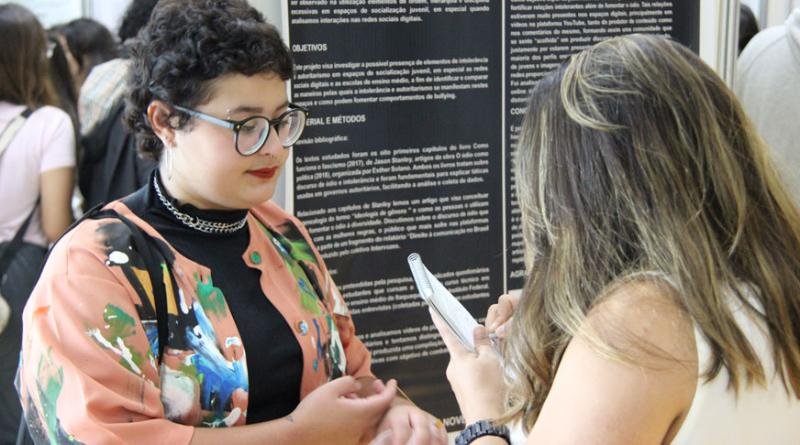 "We realized that the Internet discourse is reproduced in the school environment, in the form of bullying, although on the Internet it is on a larger scale due to the possibility of anonymity."

Isadora said that the group held workshops in which a member reproduced the intolerant speeches broadcast on the analyzed pages, and the public sought to identify manipulation tactics. According to her, next year the group intends to continue the workshops and deal with topics such as intolerance and fake news.

Not only Conict's works but Conpog's also impressed. According to the director of graduate studies at the IFSP, Orlando Leonardo Berenguel, the Graduate Congress received a good number of papers, and the research already brings concrete results, both from the Lato sensu (specialization) how much of Stricto Sensu (master's and doctorate). “I am very happy with what I saw in terms of theoretical deepening and the quality of the research. We also had a moment of exchange with the coordinators, in which we were able to hear successful experiences and share the problems along the way, which will help us to improve processes ”, said Orlando. The IFSP currently has 27 postgraduate courses, with the prospect of reaching 60 in the next three years.

The tenth edition of Conict and the fourth of Conpog came to an end with the success and the grandeur demonstrated by the numbers. A total of 1.409 people checked in on the two days of the event. There were a total of 60 monitors and more than 30 Câmpus Sorocaba servers involved in the organization, in addition to the employees of the Research Dean's Office.

Check here all the photos of the 10th Conict. 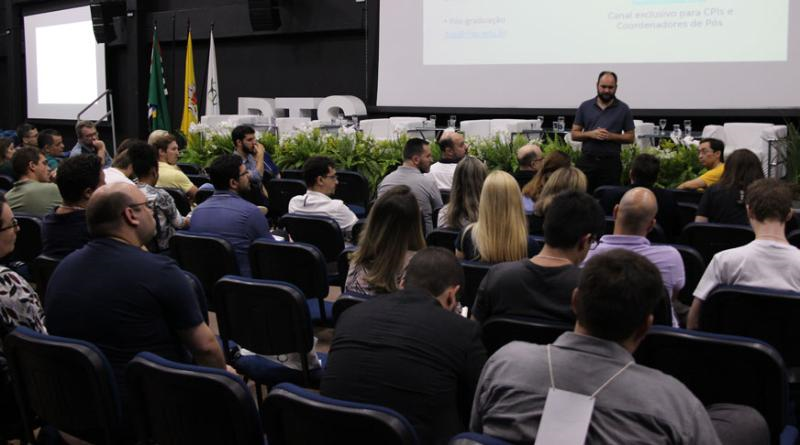