Update: Parliament's Science and Technology Initiative (ICTP) publishes letter to CT in parliament on the 2020 budget for Science, Technology and Innovation.

On Wednesday (28) the IFSP rector, Eduardo Modena, participated as a representative of the National Council of Institutions of the Federal Network of Professional, Scientific and Technological Education (Conif) in a joint public hearing of the Science and Technology, Communication and Computing; and Education in the Chamber of Deputies. The agenda was the possibility of cutting the 84 research grants funded by the National Council for Scientific and Technological Development (CNPq) as of next month. Representatives of the Brazilian Society for the Progress of Science (SBPC), the Brazilian Academy of Sciences (ABC) and other entities that are part of the Initiative for Science and Technology in Parliament - ICTP were also present. 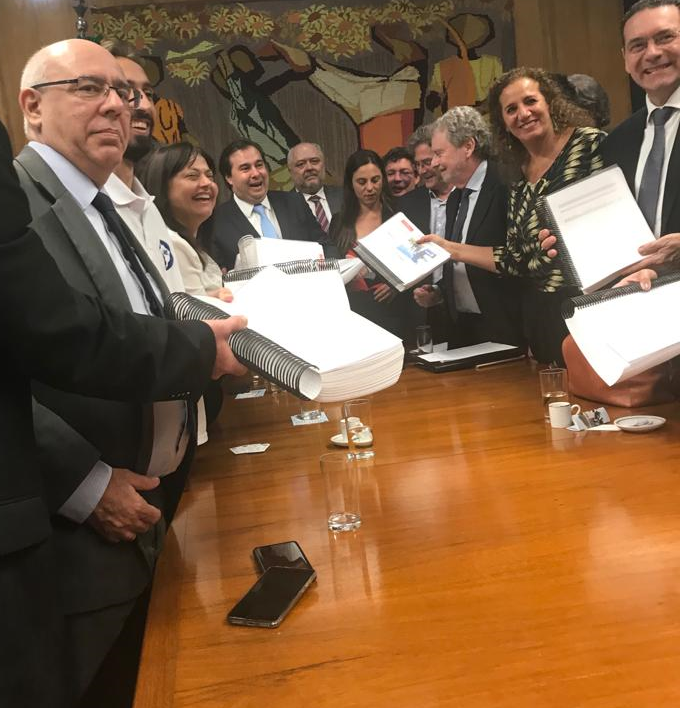 After the public hearing, these representatives handed over to the Mayor, Rodrigo Maia, a undersigned with almost one million signatures in defense of CNPq. In total, CNPq scholarships cost R $ 82,5 million reais per month. To cover the last four months of the year, R $ 330 million will be needed. The most viable possibility, proposed by the entities, would be a specific National Congress Bill (PLN) with this value. The proposal was welcomed by the deputy. Maia pledged to find, until next Saturday, a solution for the September scholarships, which will be paid in early October. According to the IFSP rector, Eduardo Modena, the deputy stated that he will try to release this amount from the Lava Jato fund, in a meeting with Minister STF Alexandre Morais. Or it will look for another way with the government. Regarding the resources for October, November and December, the solution may come from the transfer of rights project (pre-salt).

Modena stated that guaranteeing the resources for the payment of CNPq scholarships is something of fundamental importance for Federal Institutes, because without research grants, notably those for scientific initiation, students have a huge loss in their training. “It is not only academic training that is impaired, but the education of citizens, as it is in scientific initiation that these students begin their professional lives, that they learn to solve problems and that directly influences their careers, their lives and the future of the country that they represent, ”said the rector.

In a new meeting with the representatives of SBPC, ABC, Confies, Andifes and Conif new actions were defined.

Check out the document: Actions proposed, discussed and approved at the meeting.

Initiative for Science and Technology in Parliament (ICTP) publishes letter to CT in parliament on the 2020 budget for Science, Technology and Innovation.

Check out the document: Letter from the CT Initiative in Parliament